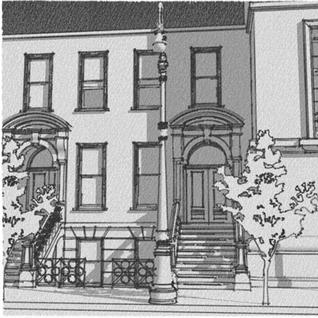 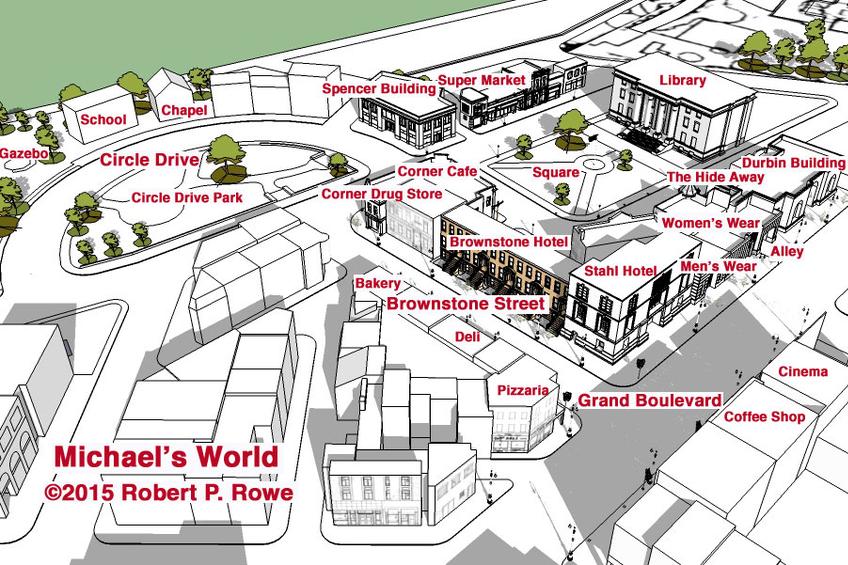 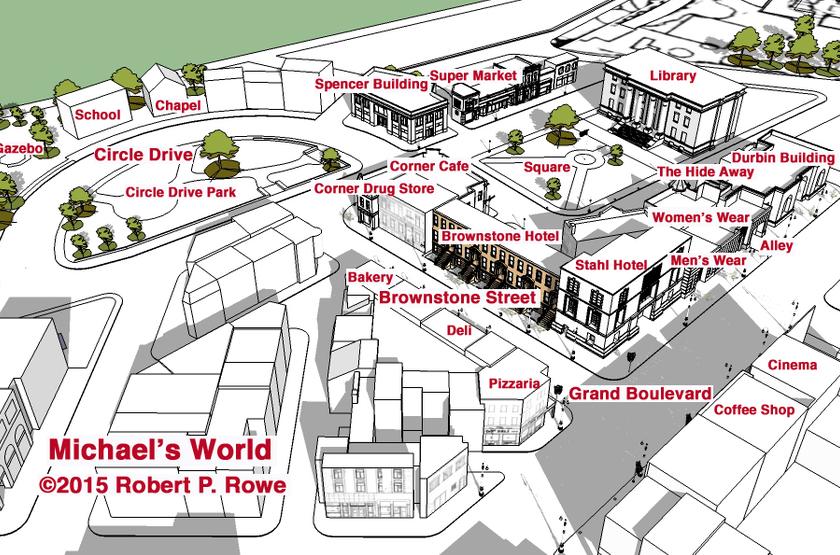 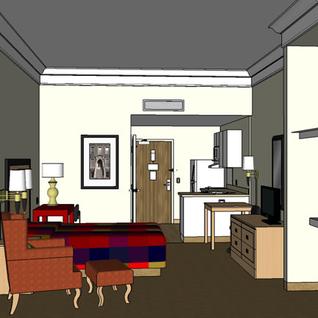 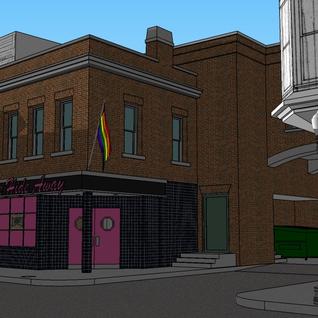 The Hide Away Exterior

Michael lives in a surreal world filled with familiar places that never really existed. His world is based upon the Universal City Studios New York Streets backlot in Hollywood, circa 1950. Many of the places described have been seen in countless films and television series of the era—and even in some that came much later.

The original film Back to the Future (1985) provides the most colorful glimpse into Michael’s World. The film’s 1955 version of Hill Valley’s Courthouse Square is much like the square just behind Michael’s hotel, where the Courthouse instead becomes Carlos’s beloved Library. Facing the Courthouse, and off to the right, is a small bar—never clearly viewed in the Back to the Future film series. A beer truck blocks the view down the adjacent alley that didn’t actually go through to the New York Street beyond. Studio drawings from the 1950s suggested that the alley would continue through to New York Street, but the extension was never completed.

The same little alley is showcased in the feature film To Kill A Mockingbird (1962). Here, Atticus Finch (Gregory Peck) stands guard outside a small town jail that blocks the end of the alley.

Courthouse Square is also depicted as the small town of Cape Flattery in many of the Ma and Pa Kettle comedies of the early 1950s, along with Circle Drive. In the film Tammy and the Bachelor (1957) Tammy enjoys her first soda at Zeeker’s Drug store, a corner drug store right across from Circle drive. And Don Knotts becomes a celebrated hero at the little gazebo on Circle Drive in the comedy The Ghost and Mr. Chicken (1966). Knotts also works at Kiddy Land, an amusement park covering the entire Circle Drive Park, in the film The Reluctant Astronaut (1967) where he drives his jeep around Courthouse Square. This version of the square comes closest to depicting Michael’s world before a full street was cut through to connect New York Street.

Knotts warbles in the church across Circle Drive in The Love God? (1969). The interior of the church, seen in Ma and Pa Kettle at the Fair (1952) is more like the chapel in Michael’s world.

The Durbin Building on New York Street is used in countless films and television shows. The building is likely named after Universal film starlet Deanna Durbin and is depicted as a Paris hotel in the feature film Ma and Pa Kettle On Vacation (1953). It also serves as the Winston Hotel in an episode of The Munsters, and Grand Central Station in the Fox feature film Down With Love (2003).

Further down New York Street, wrapping the corner of Brownstone Street is the Stahl Hotel—no doubt named for Universal Pictures director John M. Stahl and built for the feature film Letter of Introduction (1938). A new Brownstone row of buildings was also relocated and renovated for the same feature. The Brownstone buildings provide the inspiration for the exterior of Michael’s Brownstone hotel and his second floor room.

Doris Day and Rock Hudson take a walk down Brownstone Street, and past the row of Brownstone apartments, in Lover Come Back (1961). Across the street Tony Randall encounters an explosion of purple smoke from one of the sunken basement shops, after which his limousine takes off toward New York Street (renamed Grand Boulevard in Michael’s world).

Beginning in the 1950s Colonial Street, with its manicured lawns and picket fences, was an easy walk from Brownstone Street and would have provided interesting scenery for Michael’s power walks. This was literally a Leave it to Beaver (1957-1963) world since the television series was shot on Colonial Street and all over the New York Streets backlot.

From the 1950s up to the 1980s most of the described portion of the Universal backlot remained largely unchanged—simply redressed for the needs of various films or television series shot there. Even after the 1980s much remained the same, although Circle Drive had been lost to a parking lot and the Colonial Street houses were relocated up the hill to what is now called Wisteria Lane. Since then a couple of devastating fires have caused enough damage that much of the original New York Street sets are now lost or replaced. Happily certain buildings have been recreated and still stand in their original locations. Among them are the Courthouse, the Durbin Building, the small bar on Courthouse Square and the Brownstone apartments on Brownstone Street.

Carlos is only a visitor in Michael’s world. He comes from the real world, even if his city and state are never specifically identified. The weather suggests a mild California winter; but doesn’t the sun always seem to shine in Hollywood’s fantasy worlds? For reasons described below it’s best to consider that the guys live in the State of Confusion.

The year is also left a bit of a mystery, despite the specific calendar dates used. After the housing bubble burst of 2007 plenty of construction workers were left without jobs. Sadly, in many parts of the country, the effects continue today as the economy struggles to recover. Michael and Carlos could have met as early as 2008, with the events of our story continuing into 2009, or as late as 2014, continuing into 2015. The calendar dates don’t coincide with any years in between.

Equal Marriage was available in 2009 (the earliest that our characters could have married) in Massachusetts, Connecticut, Iowa and Vermont. Although it was briefly available in California in 2008, it was not available by 2009 when our characters would have tied the knot. As of this writing the states allowing equal marriage continue to grow and a Federal decision is expected from the Supreme Court by the time this story is published.

Michael helps Carlos to believe in his fantasy world so it’s no wonder that the big brother Carlos idolizes lives halfway in and out of it. The address given for Juan and Maria is the same street number used for the former Munsters house on Wisteria Lane in the television series Desperate Housewives (2004-2012). The house was greatly redesigned in the series second season as the Applewhite house (and later used as the home of gay characters Bob and Lee), leaving not a single original architectural ornament from the original Munster’s house. The house is still part of a backlot fantasy world, but at least is it contemporary to the times. In that way it bridges the gap between Michael’s mid-century world and today’s world—although both worlds remain surreal fantasies.

Most of Carlos’s world could be found almost anywhere in the United States, but his boyhood bungalow home is inspired by a seldom seen backlot house located on Universal’s old Industrial Street. The house was actually a real house moved to the backlot when the Hollywood freeway was built. The house was built in the 1920s and survived on the backlot until Industrial Street was replaced with Elm Street for the feature film Hulk.

Readers are welcome to imagine Michael’s World in any way their creative powers allow, but the author is first and foremost an art director and entitled to indulge his own imagination.